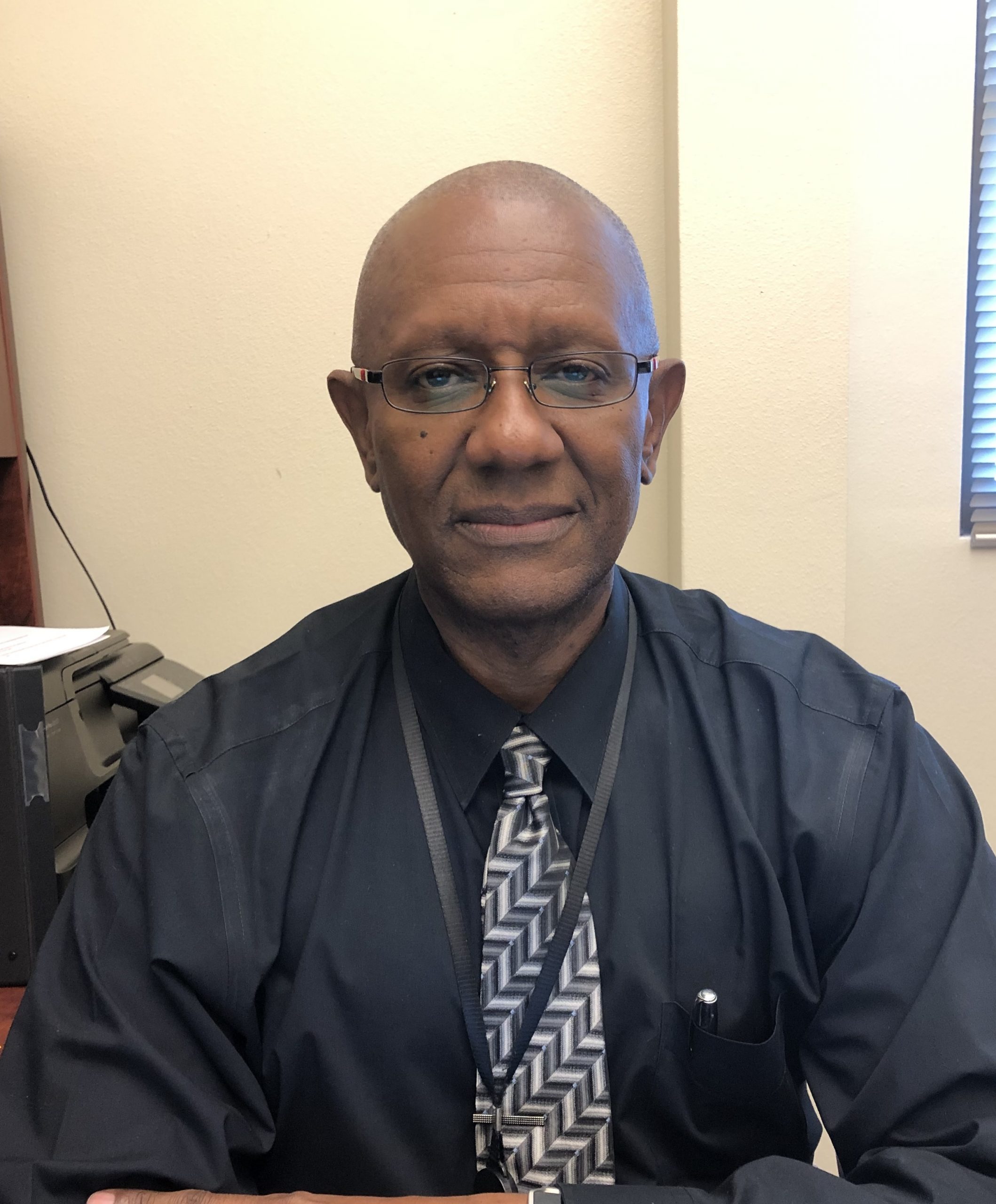 Charles Reado grew up in the small southern town of Alexandria, Louisiana. He is the twelfth sibling of thirteen brothers and sisters. He is married to Lynda of 21 years and they have 4 adult children combined and 5 grandchildren. He moved to New Mexico, “The Land of Enchantment” in 1987. He attended college at TVI now CNM then transferred to New Mexico Highlands University where he earned a bachelor’s and master’s degree in social work. He later went back to graduate school at the University of Phoenix and received a MBA (Masters in Business Administration).

Most of his adult life has been dedicated to a career of public service, while leveraging his knowledge, skills and abilities to improve the lives of children, families, and communities. As a marine, he took an oath to support and defend the Constitution of the United States against all enemies, foreign and domestic. As a law enforcement officer, he took an oath to protect and serve the community. As a firefighter, he took a pledge to demonstrate concern for the safety and welfare of all others in need. As a social worker for CYFD, he pledged to improve the quality of life for all the children in New Mexico. Likewise, as the new Deputy Director for the State Office of African American Affairs, he pledges to be transparent, truthful, and committed to be your advocate and voice for change. 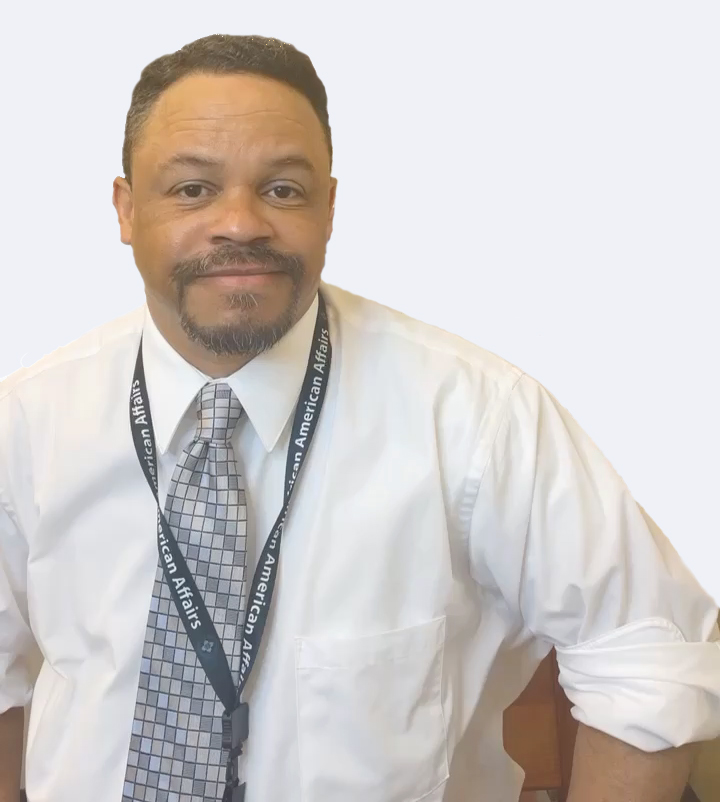 Guy Harris began his life and early education in Southwest Philadelphia, PA. The son of a Naval petty officer who retired in his final career as a Roswell NM Transit ADA Paratransit driver, Guy is the youngest sibling of 4.

After attending multiple elementary, Berrendo Middle, and Goddard High Schools in Roswell, in 1994 Guy attended South Plains College (SPC) in Levelland Texas – ultimately earning an Associate’s of Applied Sciences degree in Sound Technology, with a Commercial Music emphasis. During his time at SPC, he auditioned and earned the bass guitarist position for the 1995-1996 South Plains College Touring Ensemble.

Guy then applied and was accepted to the University of New Mexico in 1996, where he earned a bachelor’s degree in Business Administration, Financial Management in May of 2000, with additional courses in economics (Public Finance) and Africana studies, post-baccalaureate.

Guy’s professional life has been dedicated to a career of public service and public finance  – from working as an accountant at Albuquerque Healthcare for the Homeless and UNM Computer Science; as a buyer, trainer and purchasing report creator for UNM Purchasing Department; and 14 years in the budget office at Albuquerque Public Schools (APS) – for which his final 5 years until 2020 was as Budget Manager for all APS Departments. At APS, Guy was also responsible for authoring the APS Government Finance Officers Association (GFOA) and Association of School Business Officials (ASBO), international award-winning budget presentations from 2012-2020.  Guy was recently the Fiscal Officer for the Emergency Management, Metropolitan Redevelopment Agency, and Equity and Inclusion departments at the City of Albuquerque. 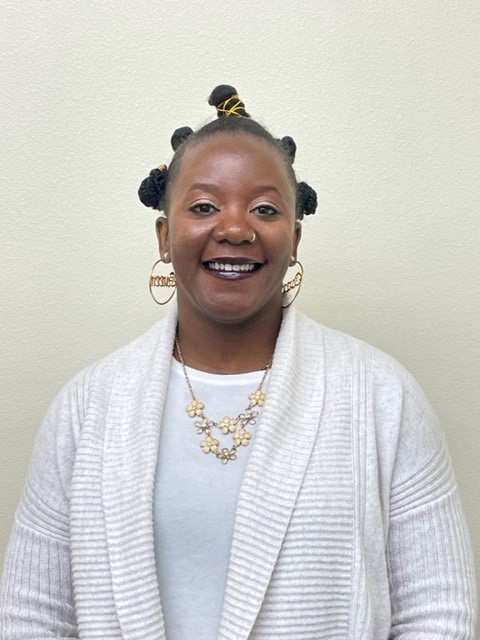 Charlycia Strain grew up in South Side Jamaica Queens, New York. She is the sixth sibling of ten brothers and sisters. She moved to New Mexico in 2005 after completing her first year in college. Charlycia describes her move as a pivotal moment in her life. A time when she discovered how she wanted to exist personally and professionally. Charlycia experienced homelessness for several months while trying to get settled. Charlycia states, “Someone had to help me or else I couldn’t get out of it.” Charlycia began volunteering around New Mexico with domestic abuse centers, gang intervention units, local churches, early childhood development centers, and before and after school centers with her new stability. Charlycia says that she wanted to serve the community because she realized how hard it was to get help when she was homeless, and now she wants to help.

Charlycia has completed two Associate’s degrees from Central New Mexico (CNM) and is scheduled to graduate with her BSW in Social work from Highlands University in 2023. Charlycia has worked as the Children’s Coordinator at Passion Church, as administrative director at Children’s Choice, youth care specialist at NM Children, Youth and Families Department (CYFD); and most recently as a lead financial analyst at Human Services Department (HSD). In taking the position as Communications and Marketing Charlycia is looking forward to serving the African American community of New Mexico. 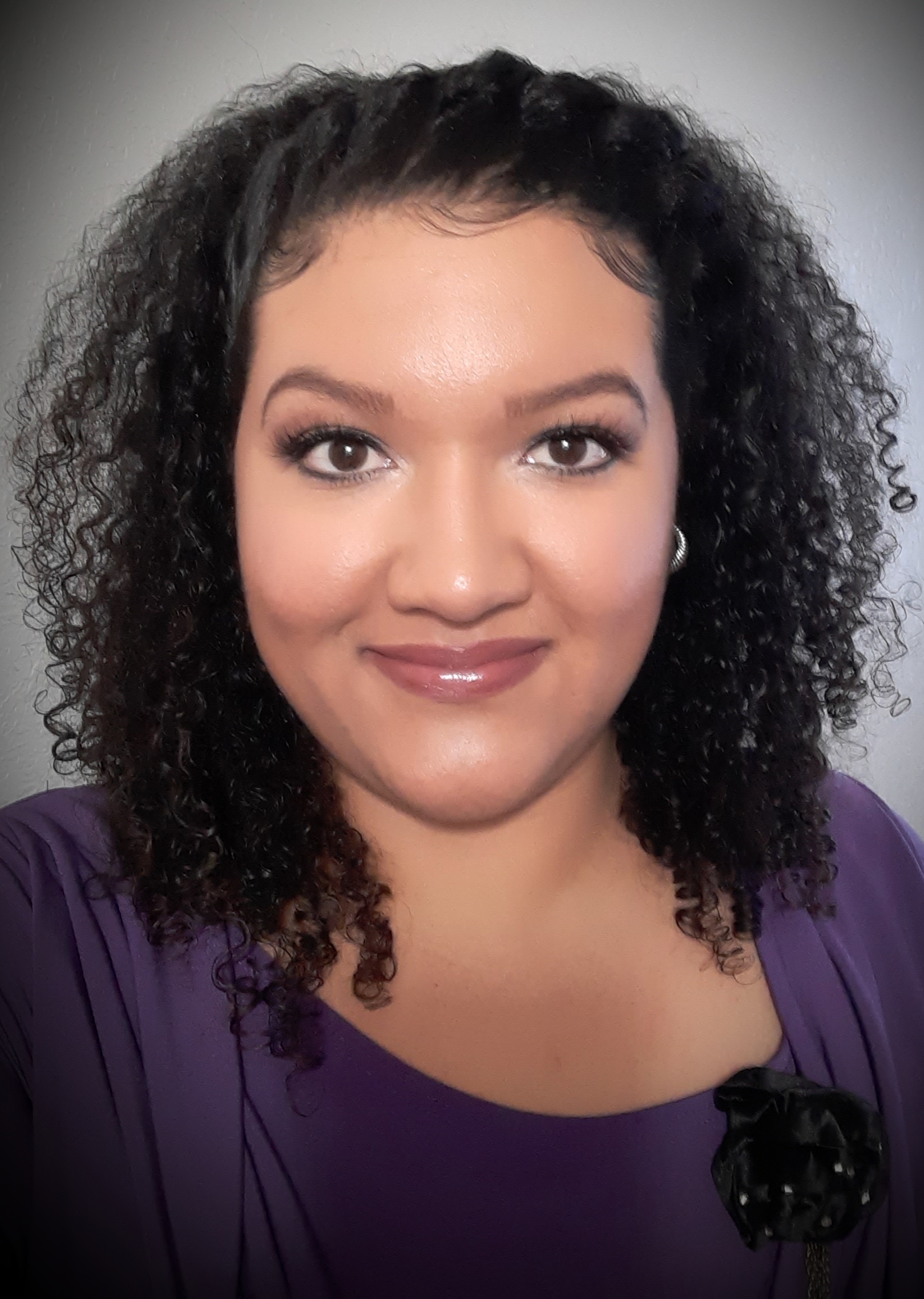 Mercedes spent her early childhood in Everett, Washington prior to moving to New Mexico in 1998. Raised by a single mother, she is the third in line among her brothers and a sister. She is also the proud aunt of two nephews and one niece. Mercedes moved to the Land of Enchantment with her family as an elementary school student. They came with nothing but a few suitcases and spent their first few month’s living at Albuquerque’s Joy Junction shelter. Mercedes watched her single mother struggle to make her way here and was motivated to become the first in her family to obtain a college degree. After graduating high school, Mercedes earned an Associate’s degree in Liberal Arts from CNM. She then transferred to New Mexico Highlands University where she earned both a Bachelor’s and a Master’s degree in Social Work.

As a low-income first-generation college student herself, Mercedes was honored to work with the LNESC Upward Bound college prep program. She spent several years serving the students at Atrisco Heritage Academy High School, empowering and educating them to maximize their potential, pursue their college and career goals, and become the best versions of themselves. Mercedes is excited to continue her public service as the new Capacity Building Coordinator and is eager to serve the African-American community in New Mexico.

Phillip is currently positioned as an Events and Engagement Coordinator for the New Mexico Office of African American Affairs. He has called New Mexico home since his father retired here in 1989 from active military service in the Air Force. He is a graduate of Highland High School, received his liberal arts associate degree from CNM, and his bachelor’s degree in elementary education from New Mexico Highlands University.

He is a former APS Classroom teacher with 10 years of experience teaching grades K-8. Utilizing and implementing cooperative learning, restorative justice, in his curriculum and instructional practices was a top priority. He served as his site instructional council chair, then, as the Albuquerque Teachers Federation union instructional council representative. Advocating for the basic needs of educators, students, and community, as an Albuquerque Teachers Federation site Fed-Rep, allowed him to have a voice in educational protocols. Phillip based his guiding principles on Maslow’s “5 hierarchy of needs”. Organized labor unionism/activism was key to discovering my next professional direction in advocacy for change in public education policies, and socio-economic reforms within our African American communities.

Phillip will be advocating for our African American communities established in our land of enchantment. Phillip will bring the skills and knowledge from his background in education and unionism to engage and influence the active political process that will benefit the Black/African American communities in New Mexico. Actively listening to community concerns, studying, researching, and analyzing qualitative/quantitative peer reviewed data for current and future programs, will inform the design, and implementation process. Building consensus within collaborative groups will be key to growing social capacity in New Mexico. Progress monitoring of the programs/policies will allow authentic and measurable growth in the areas identified by the African American community, and other marginalized groups.

Joshua Bradshaw grew up in a suburban town near Laguna Beach, CA. He is the youngest of three siblings. He attended college at San Diego Miramar College, where he received an A.A. in Behavioral Sciences and Political Science, before transferring to the University of California, Los Angeles (UCLA). At UCLA, he majored in Political Science with a concentration on Race, Ethnicity, and Politics and minored in African American Studies, while also taking course work in communication studies, history, anthropology, and psychoanalysis. Josh graduated from UCLA with honors in Summer 2017.

Before moving to Rio Rancho/Albuquerque, NM later that summer, Josh worked as a peer mentor at UCLA’s Center for Community College Partnerships. He credits that experience as something that really jumpstarted his desire and ambition to work with underserved and underrepresented populations. In the five years Josh has been in New Mexico, he has worked in education, juvenile justice, the non-profit sector, and healthcare. Josh is a team player that believes in an inclusive style of leadership. As the Health Policy Fellow at OAAA, Josh brings to this position proactive analysis and problem solving that has a multi-disciplinary approach. 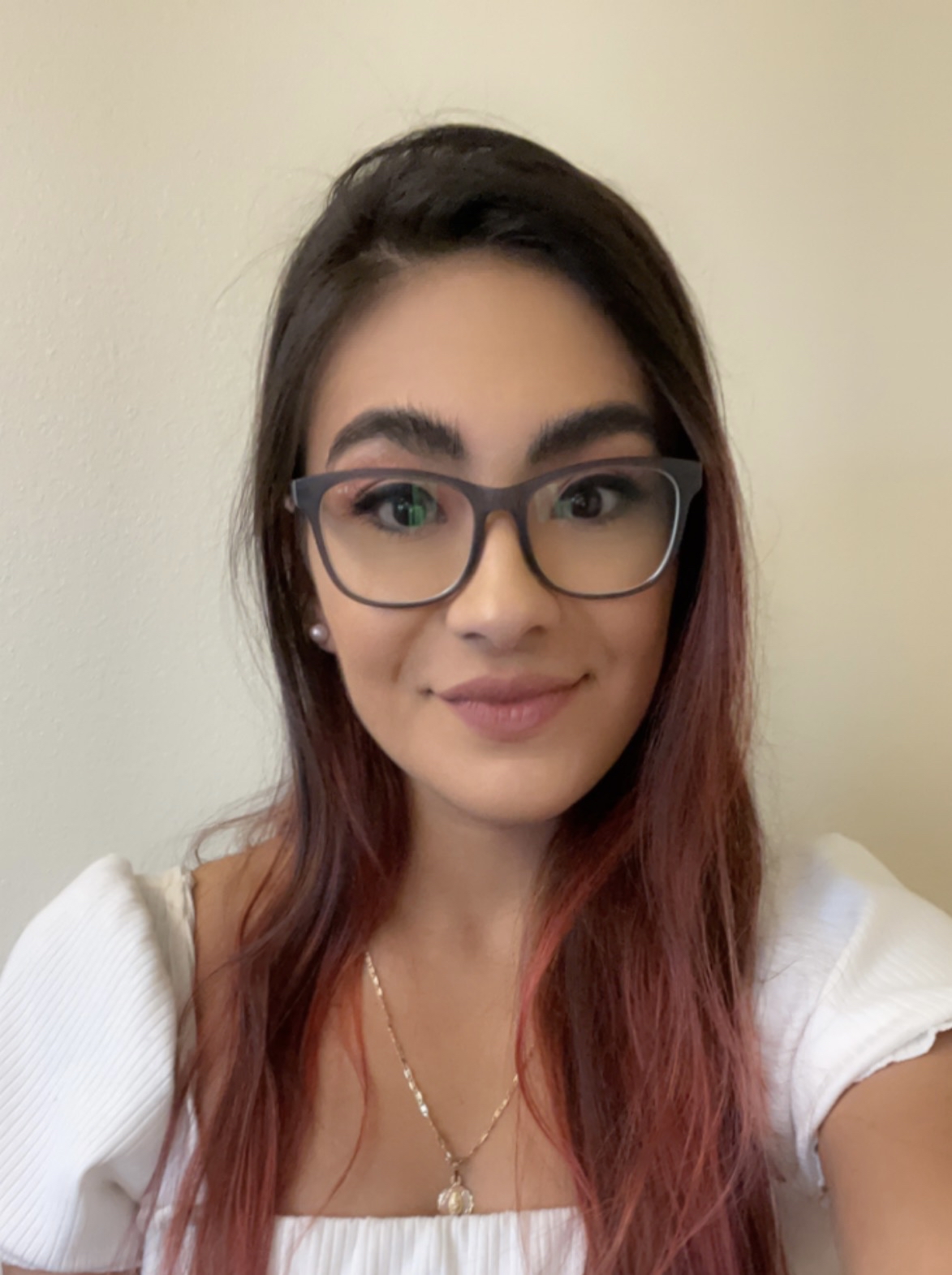 Lisbeth is originally from Buena Park, California but raised in New Mexico. She is the youngest sibling of three brothers and two sisters. Lisbeth’s parents left their homeland (Mexico) for a better future. They came from nothing, to having a simple place to call home. Lisbeth’s family moved to New Mexico in an effort to obtain better health resources for her father who suffers from multiple health conditions. Lisbeth is the primary caregiver to both of her parents, who are ill. She noticed her parents struggling to receive basic health information and/or services simply because they are monolingual Spanish speakers. Lisbeth notice that there was a higher rate of illness or death across a wide range of health conditions impacting communities of color. Most health information was not always made available in Spanish. Thus, motivating Lisbeth to attend college and become the first-generation Latina to obtain a post-secondary degree in her family. Lisbeth went to UNM to receive her Bachelor of Science in Community Health Education.

Lisbeth was an intern at UNM Student Health and Counseling, with the Lobo Prevention Pack. She was responsible for doing peer to peer education on COVID-19 precautions and prevention methods. Later, she took on more responsibility by becoming a senior student ambassador, where she managed the whole team, managed social media accounts, and created prevention programming. Lisbeth is a new community health worker at the UNM Health Science Center and will be in collaboration with the African American community in New Mexico.